A chocolate explosion occurred yesterday at the Indiana Grand Race Course in Shelbyville, Indiana. The blast registered 25/1 on the Richter scale, and shock waves could be felt as far away as the simulcast screens at Fairmount Park. Our dark chocolate bay filly, Cocoa Bandita, was the culprit.

Fortunately Cocoa does not read the Daily Racing Form and had no inkling she was picked to finish dead last in the six horse field.

Cocoa exploded from her position in gate #4 with Rodney Prescott in the driver’s seat. The pair vied for the early lead while in the three path and found themselves leading after the first 1/4 mile, a short head in front of #3 June in Bwana. As the others jostled for position Cocoa found a comfortable cruising speed and extended her lead to two lengths after a half mile. CB began to shake clear in mid-turn when #2 Sashenka moved up to chase. As Cocoa and Rodney turned for home they began to assert themselves. Sashenka could make no headway and #1 Rilla came from well off the pace to pass tiring rivals. Catching Cocoa in the lane, however, was too much to ask. Our bold white faced filly showed the heart and determination of a champion as a throng of supporters, fans and bettors cheered at every muscular stride.

Bandita crossed the finish line 2 3/4 lengths ahead of the favorite then pranced with head held high in the winner’s circle, feeling like she had just won the Kentucky Oaks on Derby weekend.

Maureen made the trek to Indiana with Aaron Emig, who along with trainer Dawn Martin celebrated passionately. I missed the live performance but high fived with friends on a return trip from Carbondale, Colorado. High five’s were in abundance as Cocoa closed at 25/1 odds and paid $53.40 on a two dollar win ticket, $10.80 to place and $4.40 to show. The (4-1) $2 exacta paid $223.60.

There were several quality horses in the field and the quick fractions were beyond what you would expect in a $10,000 claiming race. Cocoa was lavished with love and peppermints before leaving Indiana. She proved she has true class when given a good trip and honest ride. 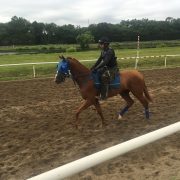 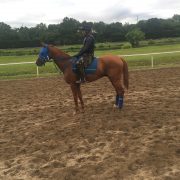 Double Down & Tune In
0 replies