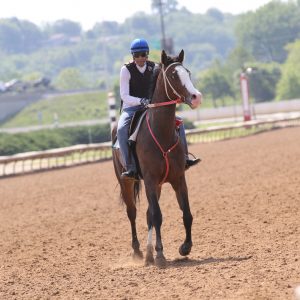 A Day at the Races with Cocoa Bandita from Saddleback Stables Thoroughbreds on Vimeo.

This well traveled and durable filly may be attaining her best form in 2016. The uniquely white faced and muscular filly by Forestry, began her three year-old campaign at Oaklawn Park on April 1, 2015. Cocoa then raced at Delaware Park and Monmouth, in the Mid-Atlantic, before returning to the Midwest. After a win at Fairmount Park she competed at Arlington, Indiana Grand, placed 2nd at Churchill Downs and finished her 2015 campaign at Hawthorne in Chicago. She has had an impressive 13 starts in a short 10 month period, going 1-2-2 with $16,993 in earnings. Cocoa was granted a well deserved respite and has now resumed training under the watchful eye of conditioner Dawn Martin. Our dark bay filly has matured and is a real handful for her exercise riders. On July 15, 2016, Cocoa was victorious at Indiana Grand, at 25-1 odds, which boosted her career earnings to $25,578 in 16 starts going 2-2-2.

Successful stallion Forestry has sired 13 crops of racing age and has combined earnings of more than $44.9 million. His most accomplished runner is Shakelford, winner of the 2011 Grade 1 Preakness Stakes. Forestry stood at Taylor Made Farm, in Kentucky, before being sold to Haras Sao Jose de Serra, in Brazil, for the 2015 breeding season and beyond.

Cocoa Bandita has been training with a high level of energy, determination and tenacity. Join us for a possible breakout year as she will likely hit peak form in 2016. Our beautiful “chocolate bandit” will compete on the Illinois, Indiana and Kentucky circuits.