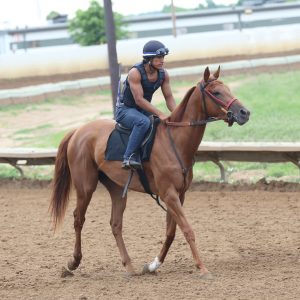 This 3 year-old filly is currently in training and will be ready to race in the summer of 2016. She has displayed the fluid speed of her sire while preparing for her debut. Florida’s most prestigious stallion, Wildcat Heir, is the sire of Mary Jeans Wildcat. Bud’s Bandita, our majestic broodmare with impressive size and scope, was shipped to Ocala, Florida to breed with Wildcat Heir. MJ was foaled in Illinois on April 14, 2014, at Saddleback Stables.

Mary Jeans Wildcat is the next to last crop of runners for her deceased sire. He was euthanized the morning of Jan, 5, 2015 after suffering from a severe bout of colic. Wildcat Heir was Florida’s reigning stallion and leading sire in 2010, 2011, 2013 and 2014. When his first crop raced in 2009, he set a North American record by siring 39, two year-old winners. He followed that breakout year by being North America’s leading second-crop sire of 2010 by money earned. In 2014 Wildcat Heir led all Florida stallions and ranked 24th in the nation with earnings of more than $6.2 million.

Bud’s Bandita is our unraced dam of four foals, two to race, both winners.

This young filly glides effortlessly and could become an exceptionally productive performer in our syndicate. MJ’s mother has strength and style while her father has sired “freaky fast” offspring. 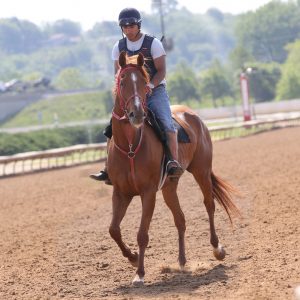 This four year-old chestnut filly boasts some impressive siblings out of her productive dam, Golden Say. Her sire, Tiz Wonderful a very effective stakes producer, finished 39th on the 2015 Leading Sire List in North America with over $4.9 million in earnings. The Central Kentucky stallion stood at Spendthrift Farm before being sold to the Korean Racing Authority in 2015.

Golden Say is the dam of Queen Negwer who was campaigned by Saddleback Stables in 2012, 2013 and 2014. She is the 2010 daughter of champion sprinter Speightstown. Queen achieved black type status in the Unbridled Sidney Stakes in 2014 at Churchill Downs. Tiz Gallatin’s half sister, Queen Negwer, finished in the money nine times in 18 starts with earnings of $116, 773. Queen was sold at the 2015 Keeneland November Sale for $110,000 to Spendthrift Farm. Another sibling, Silvertongued Tommy, won the Chenery Stakes at Colonial Downs and was 2nd in the Rollicking Stakes at Pimlico. The 2011 son of Street Boss is 6-3-6 from 26 starts with $152,927 in earnings to date. Golden Say has also produced a 2013 filly by Twirling Candy. Mint Julep Candy broke her maiden on Oct 17, 2015 at Santa Anita Park. She is 1-0-2 from 5 starts and has earned $29,680 thus far.

Tiz Gallatin was named in honor of legendary NBA Hall of Famer, Harry “The Horse” Gallatin. He mentored Saddleback Stables Managing Partner, Mike Moore, on the first intercollegiate basketball team at Southern Illinois University Edwardsville. Coach Gallatin was a relentless competitor with the New York Knicks and his namesake appears to have that same fire. Tiz has a huge upside with two black type siblings in her recent pedigree. Don’t miss out on this outstanding opportunity!